King of the road headed out to sea

Our interviewee has left to drive a client and we are sitting by ourselves in a shipping container office at the end of a parking lot in Båtsfjord. The world feels remote and exotic from these sofas. It rained wildly just a moment ago as we prepared for the shoot outside and now that we hold our poses as taxi dispatchers, the sun is shining. We are in charge of the Båtsfjord taxi station and try to think of good opening lines in case the phone rings: “Go ahead caller, you’re on the air…” 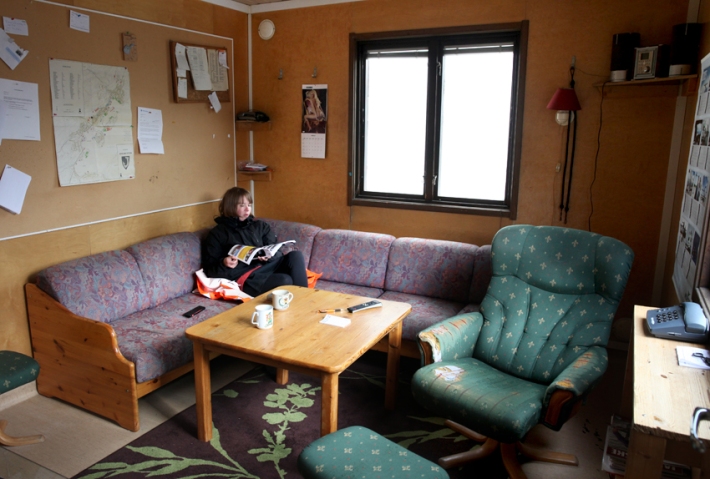 Båtsfjord is only 7,7 km long, so one drive is quickly over. Arne Martinussen returns to the office and us: He has been driving a taxi for over 40 years. Originally from Vesterålen, he arrived in Båtsfjord as a 15 year-old in 1966 and worked in the fish filleting industry up until 1980. By then, the good fishing days were over and Arne was helping a local guy by driving the car in the weekends. One day in 1987 the guy suddenly quit and Arne ended up with a car and his own license.

“Back then it was alright being a taxi driver, there were always lots of people around, day and night. There were a dozen fish landings and 6 taxis.” Then came the fishing quotas and the fisheries went bankrupt.”

These days the airport and hospital bring in a little taxi business. Arne sighs and opens a hefty book full of neatly written numbers. He finds 2012 in the journey diary and starts counting: “In January 2012 we had 38 drives to the hospital. Three years later we had 9 trips less, each trip equals 6000 kr of income, which adds up to a fair bit of income loss every month. “For a taxi business to survive in this small town, we would need a trip to the hospital at least twice weekly, because apart from that there is hardly any drives at all.”

This is the standby position of choice. © Karoline Hjorth & Riitta Ikonen

Arne has witnessed the decline of his livelihood first hand. Decisions on for example patient transport are being made far from this taxi station, and there seems to be a systemic depopulating of the small towns, one after another. “Helse Nord would rather pay for patients to fly to Tromsø, take Hurtigruta to Kirkenes, or have their neighbour drive them, than pay for a taxi. Back in the day you could just call and get a car to drive you to the hospital, now you need a medical certificate.” Arne dreams that one day his opinion will be asked when these decisions are being made, but he is still waiting.

Arne is unfazed by our idea for his photoshoot- and we are off! © Karoline Hjorth & Riitta Ikonen

After 40 years of driving, Arne has become a master of chitchatting. He has also become a professional listener. ‘Some days I drive to Kirkenes and back without having said a word; some of my more talkative passengers can run the whole conversation by themselves, asking and answering their own questions. ‘By now I think I really have heard everything – nothing shocks me anymore.

Riitta has prepared a little taxi facade out of chickenwire and dandelions. © Karoline Hjorth & Riitta Ikonen

Arne has never hit an animal on the arctic roads. He did once nearly crash with a moose, and is not counting in the hare and all the grouse…and the owls… Technically it was the hare that hit him, running into the side of his car leaving a big dent. Reindeer, although plenty, have never been a problem. © Karoline Hjorth & Riitta Ikonen

‘The best thing about being a taxi driver is that you never know where you’ll end up at the end of the day. There is never a day that is the same as the next one.” But being a taxi driver is also tough on the body. Arne’s back has been disagreeing with the profession for over a decade now and will be happy to see him drive less soon: ”I have been sitting for so many years in this car. Apparently my back will be fine by itself, but no one can say for sure when. I guess it will heal the day I retire.”

“Up here I just drive, I don’t think about the landscape any longer”, Arne explains as we express our awe for our shoot location. His viewpoint is hard for us to imagine, as we barely made it to Båtsfjord from gawping at the barren beauty of Finnmarksvidda and stopping to photograph reindeer or very nice twigs every hundred meters or so.

Weather doesn’t faze Arne either: ‘I walk out the front door every morning, no matter what. The best days are of course when the sun is shining and people are cheerful.’ Sometimes the weather takes over, and Arne has to close the shop. ‘It has snowed so hard the main street has been invisible – Funnily enough, those are the moments people start calling for a taxi. ‘They call and explain how they don’t dare to drive their own cars in such weather. People are funny like that.”

With the little time off he has had over the years, Arne has spent picking cloudberries in the mountains, some 70 kilos per summer! Now he is counting down until he and his brother will retire in three years time. We’ve just bought a new boat together, and named her ‘Havsula’. The plan is to start fishing for fun and continue to fish for as long as we feel like it.