We first met Oddbjørn Jerijærvi at Halle and Egil’s tugboat. The trio runs a cooperative, now in its sixth year of smooth operating. Oddbjørn has traveled around the world and lived many places, but always returned to his native Sør-Varangerer, for ‘you live so close to nature, you live with nature, you eat from nature and it is always the season for harvesting something… you don’t have to lock your car or the door to your house, people are laidback and the nature is clean and beautiful.’

Oddbjørn started working as a diver in Kirkenes in 1982 and as the typical jack-of-all-trades ‘Finnmarking’, he has also been a firefighter, ambulance driver and youth worker. Most recently he set up a world-class fish farm: Kirkenes Charr. It is Norway’s only sustainable land based arctic char plant and was started as a Barents collaboration between Finland, Russia and Norway. Char is the most northernly freshwater fish in the world with a delicate, mild and rounded flavor, closely related to salmon. Oddbjørn came to the fish farming industry following a long chain of family tradition of wild fishing after realising there was a big gap in the knowledge. The industry had the know-how for treating and preserving the quality through all stages of the process, which Oddbjørn followed and started raking in awards. 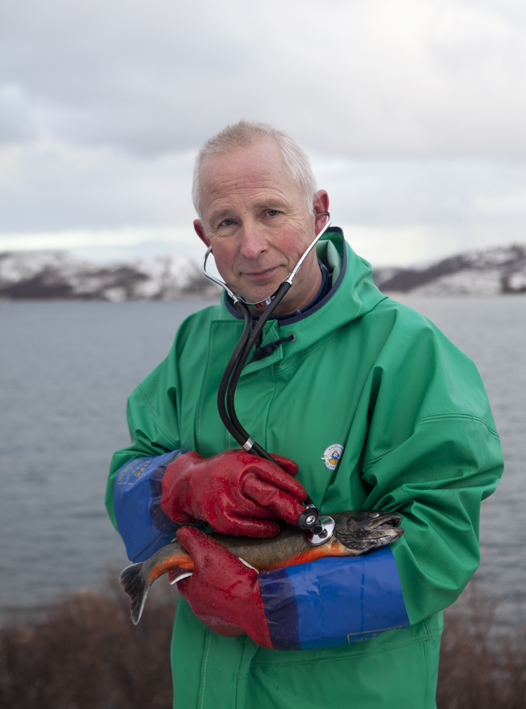 An extremely positive gentleman, Oddbjørn seems to have a way of breezing through the bureaucracy that surrounds environmentally friendly fish farming. ‘I am a charlatan and an amateur, a typical Finnmarking who has adapted to this county of contrasts. I love what I do (Latin Amator = lover, amare = to love), unlike a professional who does something not because he loves it but to earn money. There’s a big difference.’ © Karoline Hjorth & Riitta Ikonen

The fish farm is inspired by stone age and has a river running through the tubs in pretty good speed, making Oddbjørn’s fish swim countercurrent throughout his life (a bit like Oddbjørn). This means that unlike pretty much all other farmed fish, Oddbjørn’s fish have double the muscle and half the fat of a supermarket salmon. There is no mortality rate, no illnesses, no vaccines, no medicines, no parasites, no escapes nor pumps, just the pressure of the flowing river.

The Farm produces the same amount of fish in a year as a salmon farm does in a day, so economically speaking,  it’s a struggle. But warmer water, which would mean faster growth, would be un-stone age and un-Oddbjørn like. The fish grow up swimming in the natural cool temperatures of the river water. Proud of his premium sustainable char, Oddbjørn calls himself a pensioner ‘on holiday without pay indefinitely’. The product comes with a premium price tag for a niche market who appreciates quality fish (having tasted it, we’d say it is worth every single krone!).

The best raw-material of the year from the sea – 2009, a national competition with 250 products, judged by 16 independent judges. For the first time in the competition´s history all the 16 judges agreed Kirkenes Charr was the best product in Norway. © Karoline Hjorth & Riitta Ikonen 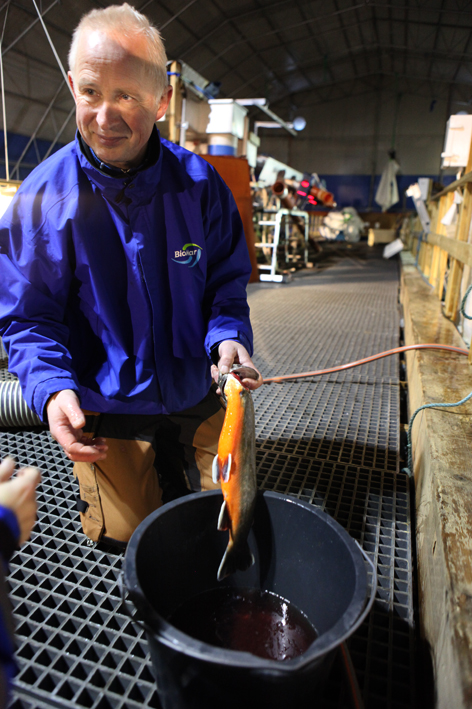 There is a simple way to check the fitness of your dinner yourself: press your finger down on the side of the fish and let go. If the dent stays there you know there is a lot of fat and little muscle – if the flesh bounces straight back, your fish has muscles. As Ingrid Espelig Hovig (a famous Norwegian chef) said to Oddbjørn, ‘it’s like putting your finger into concrete’. © Karoline Hjorth & Riitta Ikonen 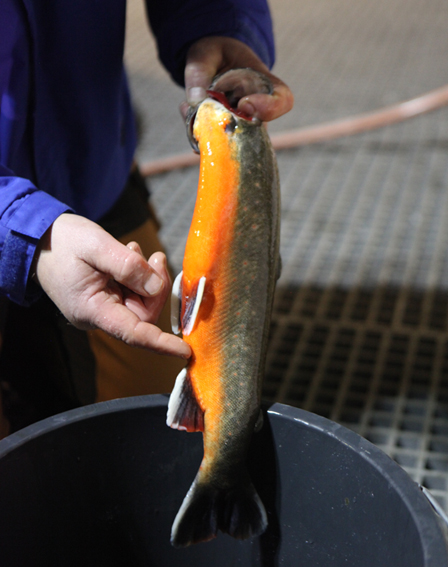 During the summer the fish swims around with a lot of the red colour inside him but in the autumn’s mating season, the male takes all the red pigment from the meat and places it on the outside to look very attractive. This makes the meat pale and the outside red. Once the romancing is over, he puts the pigment back into the meat again. © Karoline Hjorth & Riitta Ikonen 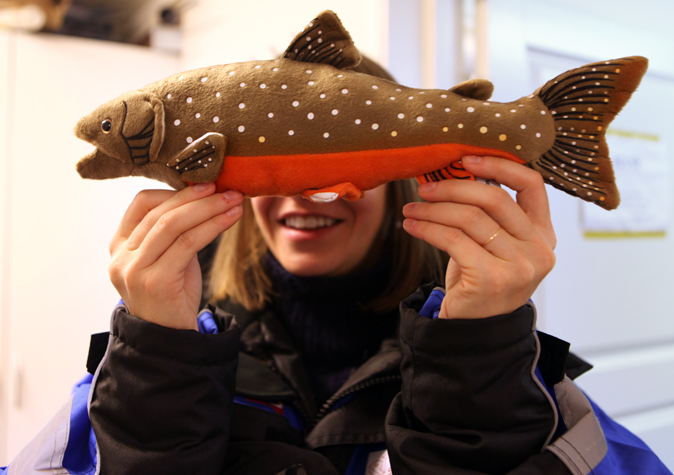 Char has never been bred, like the salmon that has gone through billions of kroner programs to get the right size, right shape, all the elements that goes into making a uniform, streamlined product that fits into the machines and get it to go through as fast as possible. The char has been allowed to develop naturally, which means you get a large variety and a genetically varied breed of fish, which is unique in the fish farm industry. © Karoline Hjorth & Riitta Ikonen 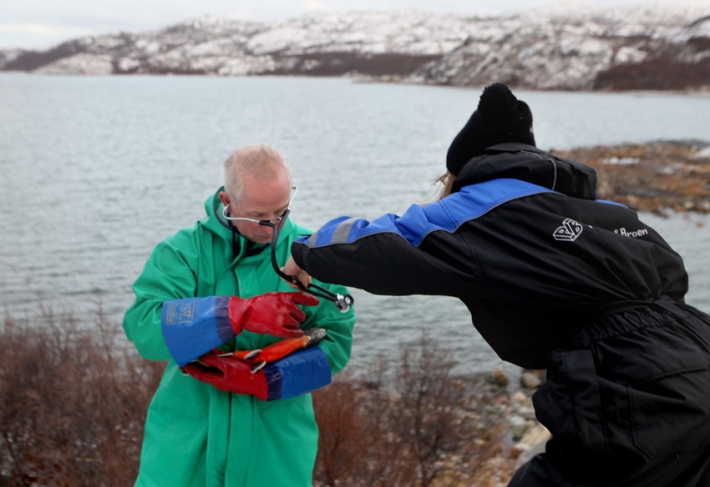 The char was one of the few creatures that adapted to the extreme conditions of the ice age surviving underneath 400 meters of ice. Sun rays forced their way through the ice in the summer when the snow melted a little. That kickstarted algae production and plankton which fed the little 10cm chars. It is an extremely robust and hardy fish. © Karoline Hjorth & Riitta Ikonen 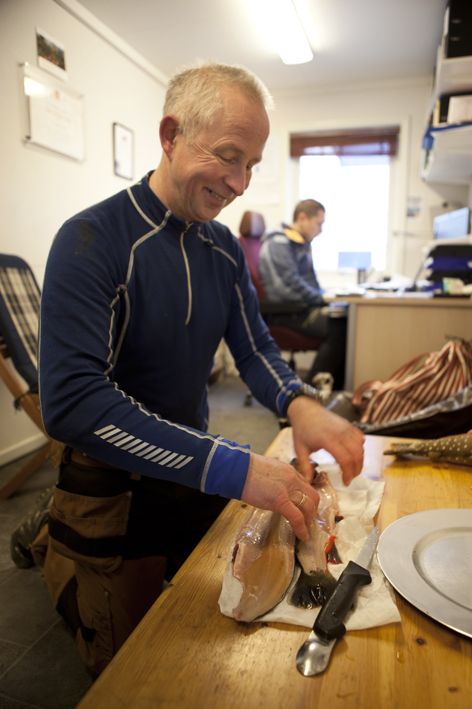 Another trick from the master: Impress your dinner guests by showing them how fresh the fish is: 1. Place the filleted fish in front of your guests. Step number 2, see next image.  © Karoline Hjorth & Riitta Ikonen 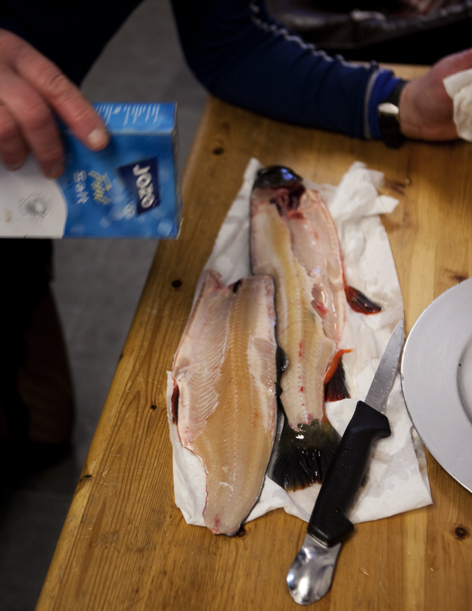 2. Sprinkle some salt on the raw fish and watch the magic happen as the muscles starts to shake and the fish looks as if it is still alive and kicking. © Karoline Hjorth & Riitta Ikonen

Our leaving present from the team at Ropelv was a box of golden arctic char roe.  © Karoline Hjorth & Riitta Ikonen

Inspired by Oddbjørn´s speech on how to make the most of Kirkenes living, we did our best attempt with the most luxurious, short-traveled evening snack to end the day  © Karoline Hjorth & Riitta Ikonen