One day, while feverishly searching for a pump for Laila’s shoot, we stopped a young man in the hospital corridor. Not only did Karl Gylseth take us to the pump, but he also turned out to be our neighbour at Elevhjemmet, the hospital’s accommodation. He had answers to many of our endless hospital questions too and convinced both his boss and everyone’s favourite handyman, Kanthan to take part in the project.

Working as a physiotherapist in Kirkenes hospital for the third week now, Karl first came to Finnmark and Sør-Varanger in 2009 to complete his military service. One of his working areas as a border guard and many of the exercises during his service  took place at one of his favourite spots in Sør-Varanger, Grense Jakobselv. Located on the shore of the Barents Sea, at the border with Russia and at the mouth of the Jakobselva river, we headed back to Grense Jakobselv with Karl and instruments familiar to both jobs: a wheeled forearm walker and binoculars.

Karl introducing the ins and outs of the knee and breaking down the cocktail of skills that a physiotherapist needs: ‘You have to know a bit of everything; anatomy, physiology, psychology, pathology, nevrology, fractures and joints. But it’s not just about the knee, it’s about seeing the whole human being. Karl finished his physiotherapy degree in Næstved in Denmark last spring, but found it difficult to get a job and moved back to Norway. One Wednesday in October the head of the physio ward in Kirkenes called and offered him a temporary position and wondered how soon he could start. Five days later Karl walked through the doors of the hospital for the first time. © Karoline Hjorth & Riitta Ikonen 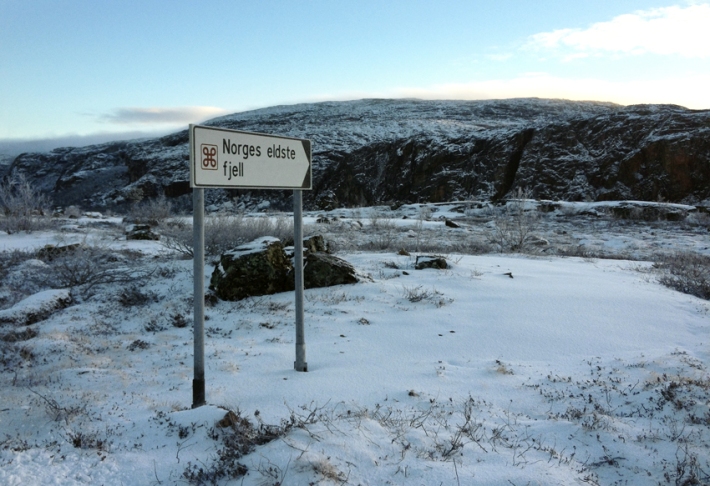 Karl had never been to a physiotherapist before starting the studies, and had perhaps expected it to be more lucrative when it comes to income. ‘Not to say that was the reason I got into it in the first place, but I see now that if you are doing it for the money, you should not become a physiotherapist. But if you do as I do, to see how your job helps other people get back to their lives, or to obtain a function they weren’t able to before, I really see that as part of my income. If you can find happiness and joy through your job in being part of creating and building something in this way, then you are a well paid physiotherapist.’ © Karoline Hjorth & Riitta Ikonen

Grense Jakobselv is Norway’s youngest and Russia’s oldest unchanged border. One of the tricks that the Norwegians used to mark the territory was to establish the stone chapel King Oscar II Chapel here in 1869. © Karoline Hjorth & Riitta Ikonen

The Norwegian border guards at Grense Jakobselv have a very manly Saturday ritual. It is a fixed routine to go swimming every Saturday, with a hearty rice porridge meal for lunch to follow. © Karoline Hjorth & Riitta Ikonen

Luckily for these gentlemen, the autofocus wasn’t working under these icy conditions © Karoline Hjorth & Riitta Ikonen

One of the reasons Karl wanted to come back to this area again was that he knew he could get used to the dark and cold winters. ‘I had pictured it to be dark as night for two and a half months straight, and with -30 degrees from the beginning of autumn until May – and then I realised it isn’t like that at all. It is so pretty up here, if you want to see untouched nature you have all the opportunities in the world. I find the northern lights so magical and beautiful every time I see it.’ © Karoline Hjorth & Riitta Ikonen

Karl is also the successor of the farm back home and within the next ten years he hopes to call himself a combined physiotherapist and farmer – ‘I really hope I succeed in doing both, as I think it is important to really be there, to be present and really there in each job, you need to be focused. © Karoline Hjorth & Riitta Ikonen 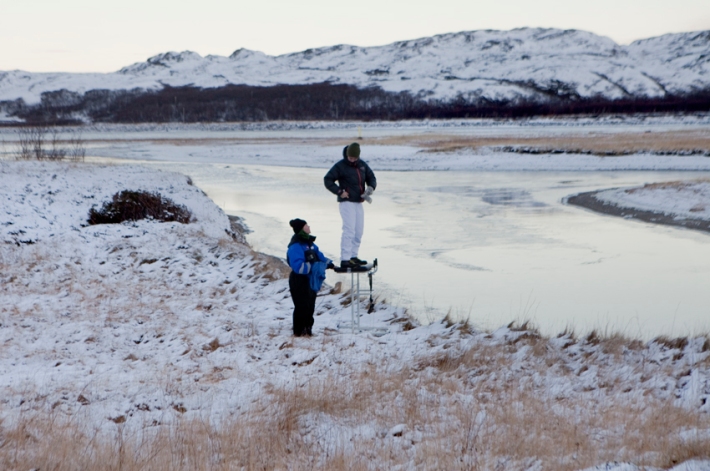 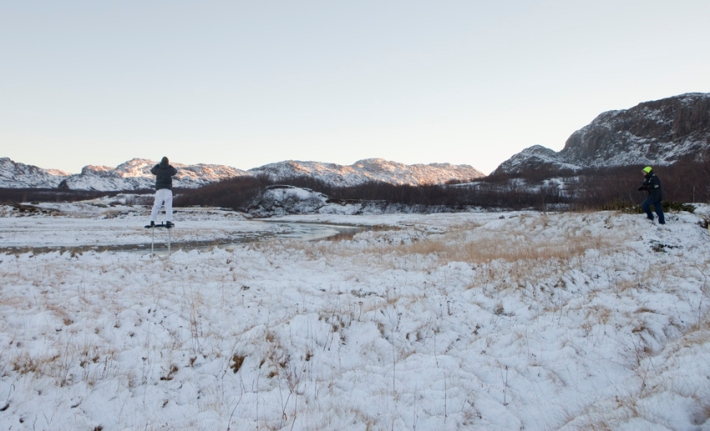 What has made most impact on Karl over the last three weeks is the way he has been welcomed. For now he is only in Kirkenes for 3 months. ‘When I got here I had expected people to be nice and friendly, but they have been so much more than that. They have been so inclusive, I quickly made friends and I was part of the community since the beginning, which made me feel a lot more at home here than I had expected. Because of that I would really like to get an extension. If I get the offer, I will definitely accept it. © Karoline Hjorth & Riitta Ikonen 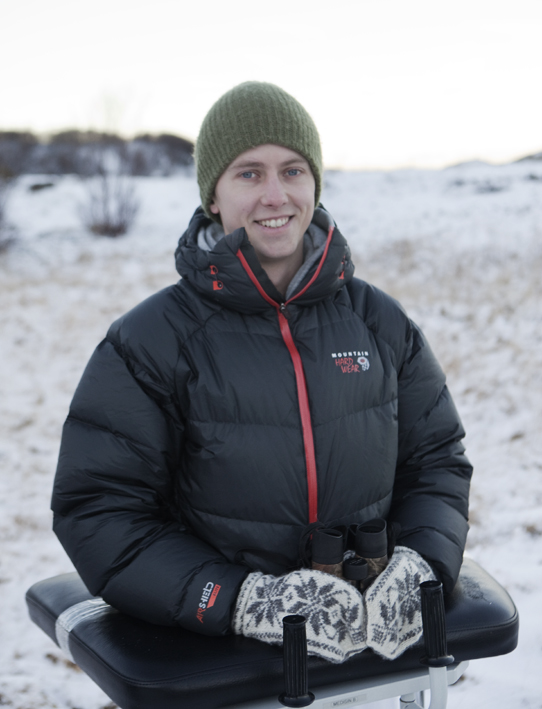 Karl grew up in Hole, with Hønefoss as the closest city. When applying for his military basic training, he was set on getting as far away as possible, and was tempted by the reputation that the border guard service that GSV (The Garrison of Sør-Varanger) had, with its demanding and hard service, and with many motivated and skilled people. ‘The border guard service is also a little bit ‘snooky looky’, where you hide and observe, rather than being part of a combat unit. It’s all about seeing, but not be seen, observing the enemy, cover yourself and crawl through the grass, nobody should see you… I thought that sounded exciting. We were not used in a military context though, we were partly civil and partly military. The ‘snooky looky’ is the military part, but the job you do as a border guard is also very often about showing your presence, to let the surroundings now that ‘we are here, we are in control of this area, we see you’.’© Karoline Hjorth & Riitta Ikonen 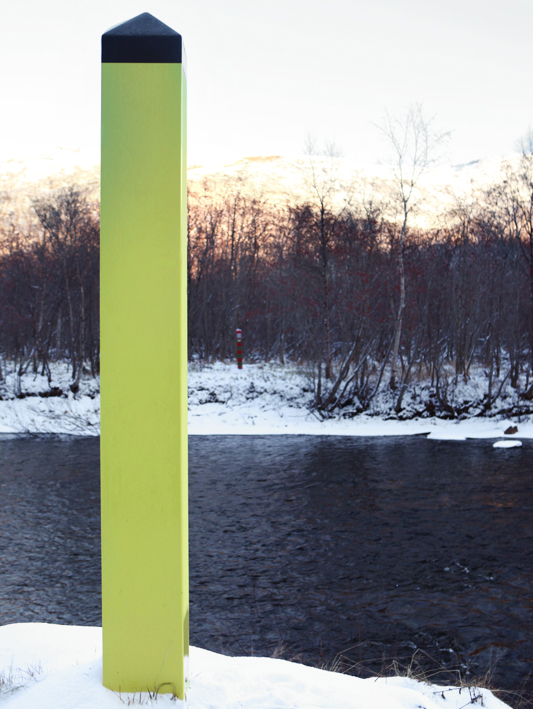 The border that runs through the river is marked with 415 border markers, numbered from 1 through 415 starting at the Finnish border. Karl was photographed around the 400th marker. The Norwegian markers are yellow with a black top while Russia opted for red and green. Originally made of wood, they are now made of composite materials. © Karoline Hjorth & Riitta Ikonen 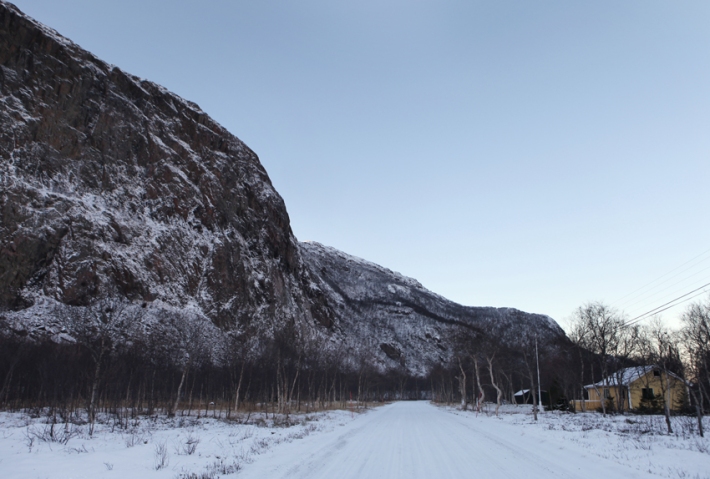